Berry (Only in his Eevee Form)

Idk what to put here for info.

A human with a Purple Jacket with gloves, brown hair, and a purple and grey bandana,

Alpha wears an outfit similar to Icicle, But instead he has the scarf on his right arm.

Alpha has the ability to shapeshift into an Eevee, Warp via the shocker sword he has, and a few other things that go unlisted for now.

Determined, Alpha is used to being on his own and can be pretty cautious at times. He usually is pretty comical at times too but theres not much else to say,

Alpha NEVER shuts up about Cat Puns, Oh yeah somehow he bought guns into the cafe (He has an LMG in CC2 and a Paintball Gun in CC3, Thought the paintball gun is for AlPhA.)

Alpha wearing a familiar looking outfit... Hmm, I just can't remember what its from. 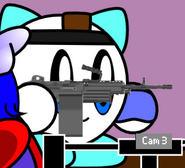 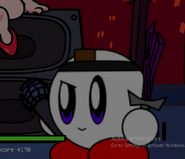