Jonny (Shown in one project) and 2 others who are currently unnamed.

Pinkia (supposed to be Cherry, but Joe realized that Cherry is L Kirby's girlfriend.)

None (in some universes)

Joe, also known as Kirby Joe,and its full name Joey Brook is a Kirby OC made by leogames2016 who also made other versions of Joe, including the origin of Joe's design, Dorian Joe.

Joe acts very innocent, but can be serious if required. He also had some issues with other OCs, such as Kirbix or Roadrash, making him get frustrated more easily.

For some reason,especially in His games,He has a heroic side that will make him defeat the evil. Nothing is known about it.

Joe in his Kirby form is a lime green Kirby with light-blue shoes (his feet might be green) and three-spiked orange-yellow hair.

Originally created as a Dorian recolor, Joe gained many forms, such as a Human form and the more common Kirby form, as well as a few others. While similar in appearance and age, Joe shouldn't be confused with another OC of the same name who is nicer than Joe, who is also nice, although he can be pretty innocent. 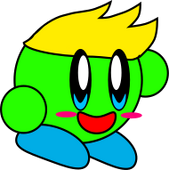 An old version of Joe, with yellow hair, nicknamed "French-fry hair Joe" and "Iconic Hair Joe", which eventually was adapted into Joe (RubiksDude95) 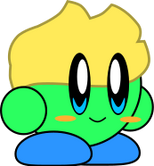 A scrapped look of Joe, who is now a seperate OC named Joseph (RubiksDude95).

The Alpha606 Trilogy Banner, a game that includes Joe as a item instead of a character in Escaping the Region and as a glass breaking tool in another of the games.

A younger version of the previous Joe design.

The icon on the Joe Tupper that Leo uses on Discord.

Joe Plans to Play SSB4 With Joseph and Go to Trick and Treat
The Halloween 2020 Project posted before his ban. 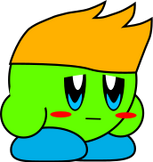 A calmer Joe (Used on the Dark Joe Defeated photo)

The cover of its game