Cherry (only in Super Form) Rickey

Legacy page.
This article is a legacy page. It contains older information about the pasts of users of Scratch Kirby OCs and Users Wiki.

LK is calm, polite, understanding, respectful, has a strong sense of justice, and is a bit of a hot-head

Laiden or L Kirby, was born into a family of three, his "father", his brother, Mellow and his sister, Lauren, Laiden's "father", Adrian, had a hatred for the Energy Diamond Protectors for being more powerful than others, and he wanted them gone for good, after Laiden's mother died giving birth to him, Mellow took Laiden, at the time more commonly known as Lucas, and both Mellow and Lauren went into hiding. At age 3, some of Adrian's followers found L Kirby and before they could shoot him, Mellow took the poison dart for his little brother, Laiden then attempted to get his brother to safety, but accidentally pushed him down a pit, the young LK was eventually brung to an orphanage that also served as a school, Laiden was one of the only two not adopted, at that time, LK also got stuck with the hammer ability thanks to a trickster. Eventually, he decided to go journey off, in a large town he met Cherry (Headcanon), and she brung him into her house. At some point Laiden was sucked into a portal that took him to Imagination World, there he met Lovestruck, who got him his cap, and since then, he's been known as L Kirby! 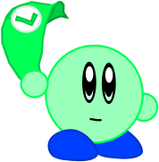 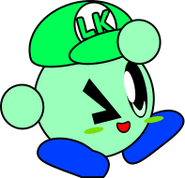 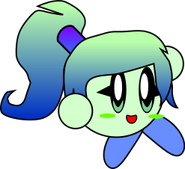 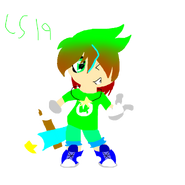 L Kirby as a human (Drawn by Lovestruck19) 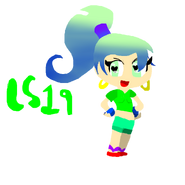 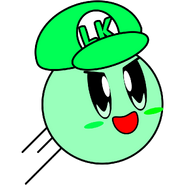 LK confessing his love for Cherry to Meld, Sparky & Saito
Community content is available under CC-BY-SA unless otherwise noted.
Advertisement