Number of other OCs

A Temporary Blocked Message because he sent his Discord Username 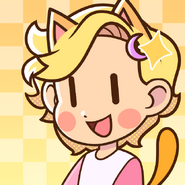 His scratch PFP,Still used in some communities but lost in his PC files.