Lovestria Kirby is a blueberry-blue Kirby with orange eyes, green hair with a dark green flick and a palm-tree ponytail, green cheeks and light pink shoes

Lovestria is playful, sassy and arrogant

LK is a bit of an extra life farmer, he likes to have his lives around the 60 mark, and during one of his adventures, he died but upon respawning... he lost two lives instead of one but he thought "Eh, it's probably nothing" and carried on like normal, however that other extra life gave Lovestria Kirby her conscious. 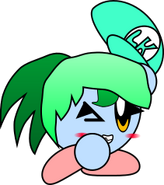 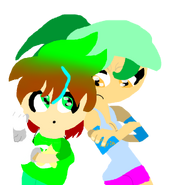 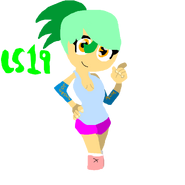 Human Lovestria on her own (Drawn by Lovestruck19)
Community content is available under CC-BY-SA unless otherwise noted.
Advertisement